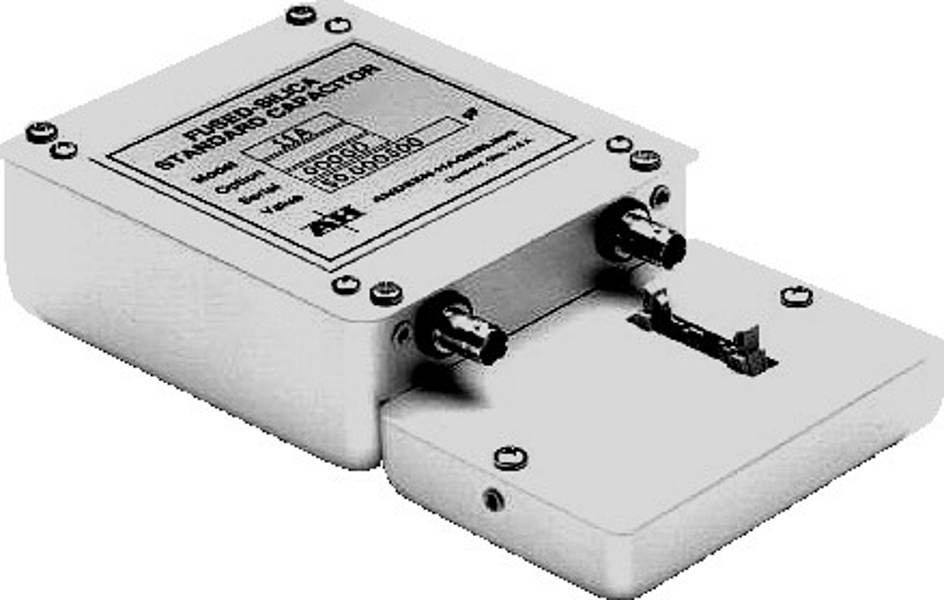 AH 11A capacitance standards can be ordered with any value from below 1 pF up to 115 pF. Furthermore, if the application for which the original value was purchased becomes obsolete, the AH 11A can be returned to the factory and set to a totally new value for a nominal cost.

Traditionally, capacitance values for transfer of higher echelon calibration values have been chosen to be several parts per million above 10, 100 and 1000 pF.

This is 5 ppm below 100 pF. Values slightly below 10, 100, or 1000 are preferred to those above since this allows the capacitance bridge to most conveniently display an additional digit. Otherwise, the exact choice of values should be based on convention, personal preference, and standardization among groups that are exchanging calibration values.

AH 11A standards may be sent for calibration by shipping the entire AH 1100 frame containing up to four standards.

Alternatively, if the calibrating lab has an AH 1100 frame, then only the AH 11A standards that are to be calibrated need be sent.

These are easily removed by removing the top cover of the AH 1100, disconnecting three cables from each AH 11A, and loosening four mounting screws. The calibrating lab installs the AH 11A in that lab's AH 1100 frame to perform the calibration.

The AH 1100/11A system is much more impervious to its environment than other capacitance standards.

The AH 1100 and AH 11A's can be shipped in a well cushioned box comparable to that used to ship other precision instruments.

With such packaging, no other special handling requirements are necessary.

The small thermal hysteresis of the AH 11A means that it does not need to be shipped at its operating temperature. This eliminates the need to include heavy batteries in its shipping container.